As all of my loyal readers may recall, I posted previously about how I first learned Kathy's name in that long forgotten waiting room in an oral surgeons office.  And just as quickly as I picked up that mag, I was called back into surgery and the identity if that mag quickly became forgotten in an haze of those powerful knockout drugs.  For background, click here.

For the longest time I assumed it was a Modern Bride mag as I remembered an article on her impending wedding.  Finding this magazine issue has been nothing less than a quest for me, and now I am proud to present to you, loyal followers....... 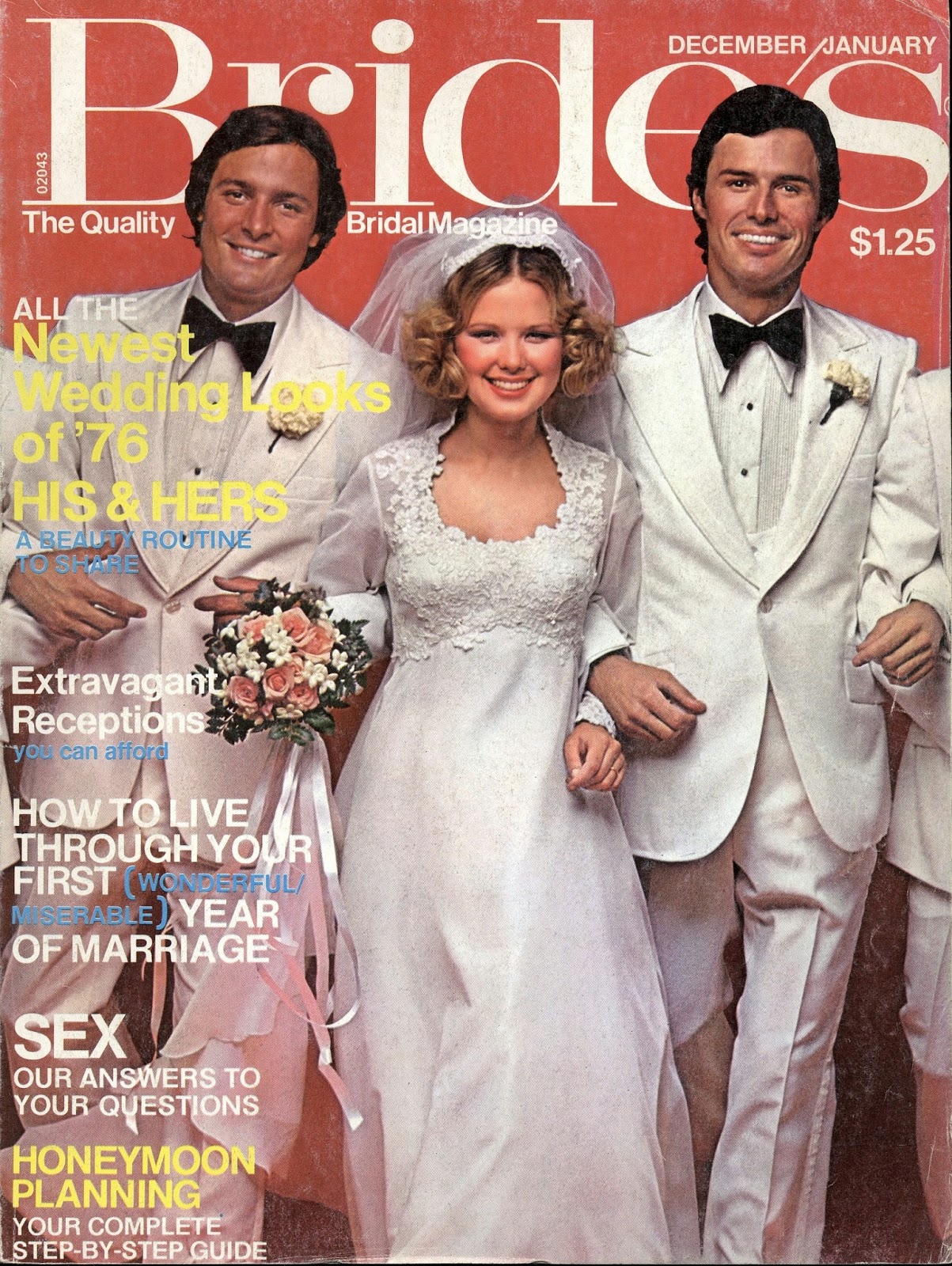 Okay, so you say, the mystery is solved, the quest has terminated.  Weeeeeeellllll, there's just one, teeny, weeny, problem.......this is not the magazine I remember. Nope, no way.  Yes this is Kathy on the cover, BUT there are several problems...

First, in the mag I remember, the background was white, not red.

Second, the shot of Kathy on the cover was a closeup, and certainly not with a couple of dudes like here (no offense guys).

Third, and most important, there was most definitively an article about her on the inside - calling her by name.  This mag had NO reference to any model's name.

So I bought this, and soon realized that, nope, this wasn't the mag I remembered.  Oh my!!  So the mystery deepens.  What WAS the magazine that I saw in that waiting room all those years ago? Another bridal magazine or a different magazine altogether?  Now I have no idea in which direction to even search!!

And to add insult to injury, at the same time I also purchased.... 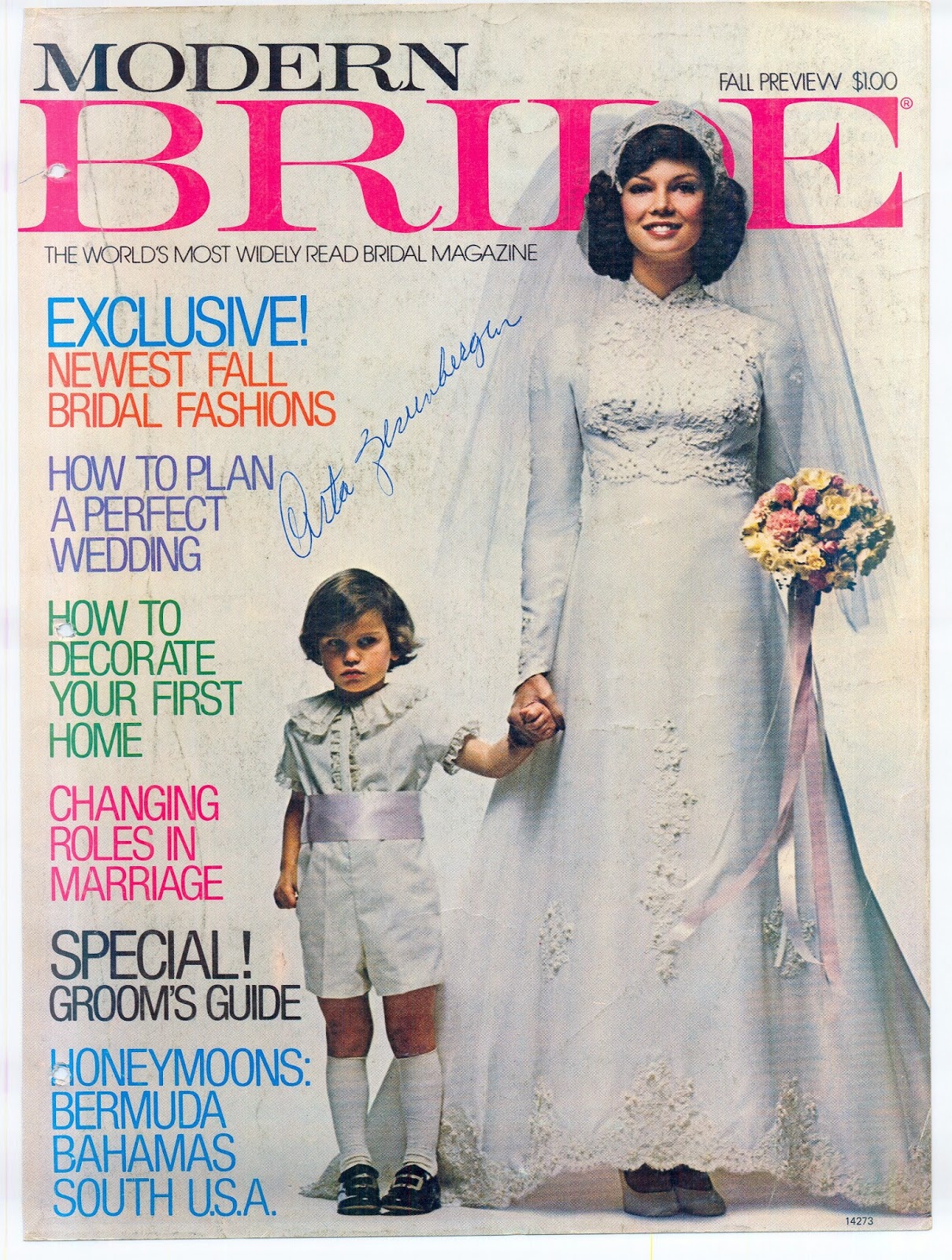 Yeah, I bought this too thinking...finally, FINALLY, I'll discover the name of this mystery model, but, alas, no deal.....soooooo

In this latest edition of the K Club Special posts (1), we're going to feature Mick Lindberg.  Mick appeared on the scene in the early 70s and was a regular model in the Big Book catalogs for a several years.

I admit I don't know much about her career before her appearances in the 70s catalogs.  We do have a few of her other modeling pics such as this modeling composite below... 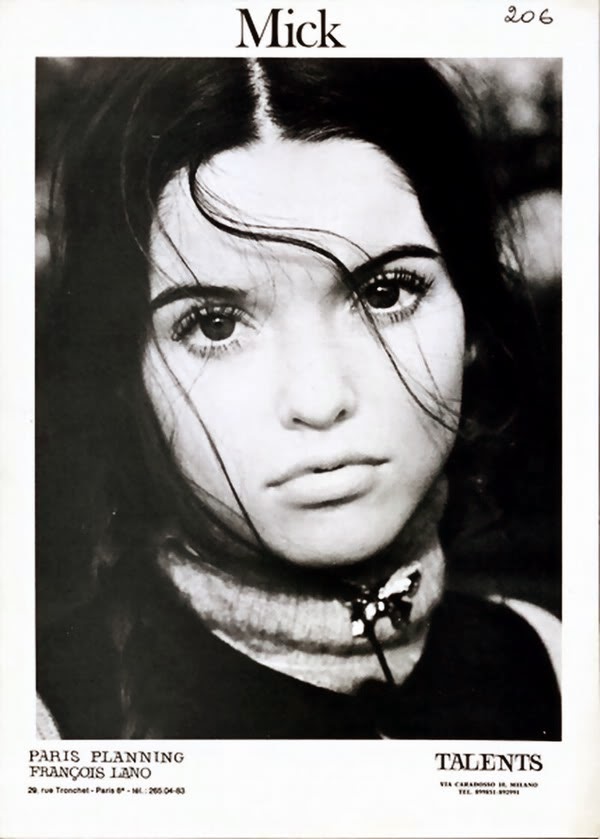 My, such a serious face for such a cute gal (yeah, I know its one of those agency shots where you're not supposed to smile, but still).  (2)

Like all the other K Clubbers, she made the rounds in the usual places such as... 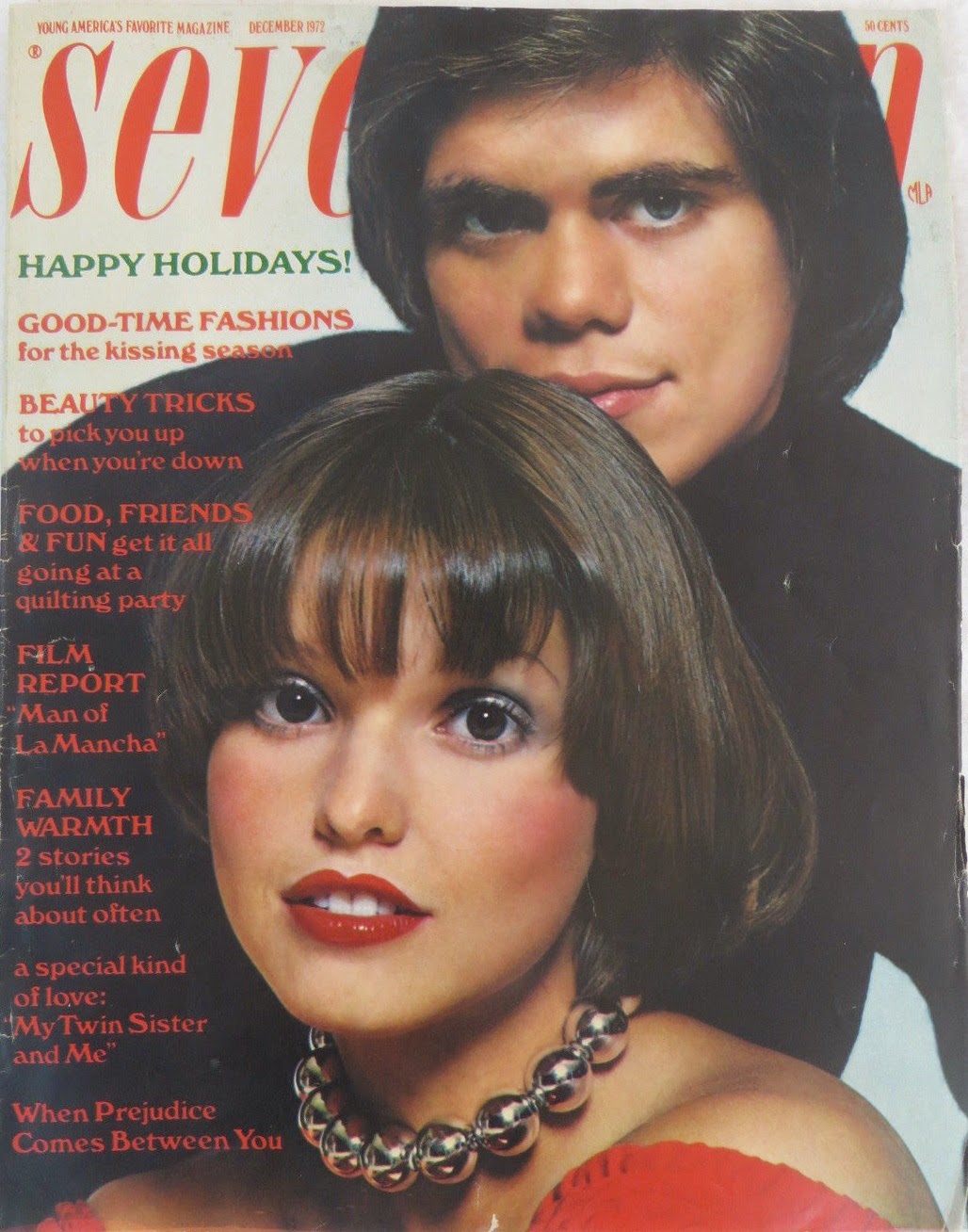 here in Seventeen magazine and... 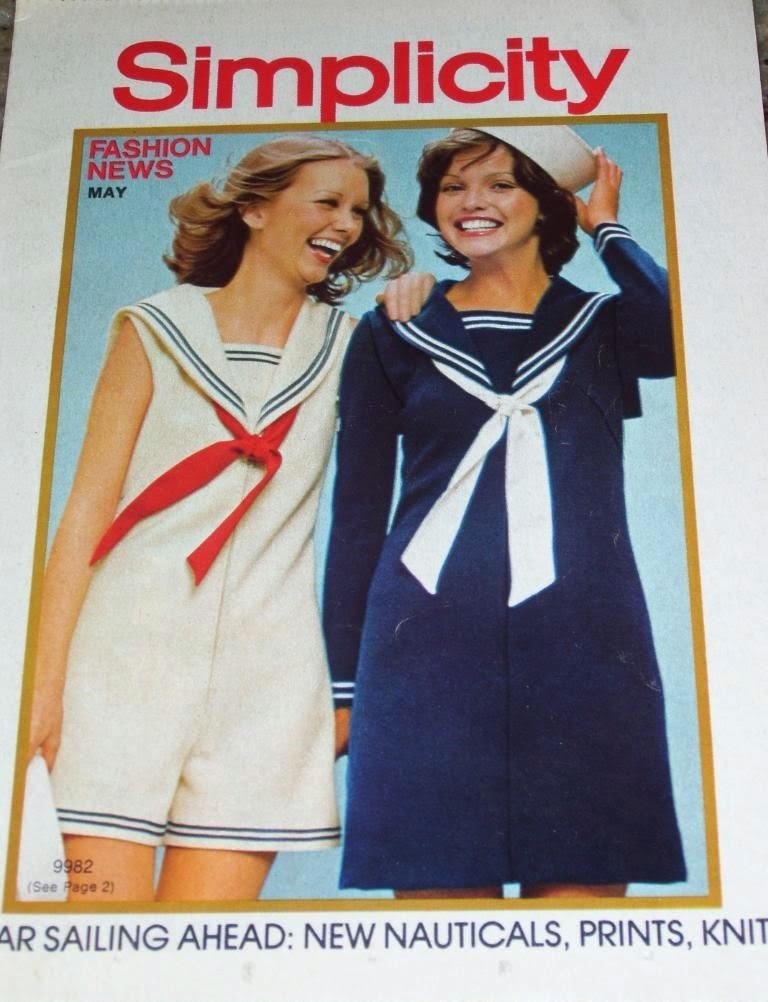 here in this Simplicity pamphlet.

One problem that I had putting together this feature on Mick is that she usually appeared in sections that I feature in other categories.  So, do I save those pics for those posts or use them here?  For example.... 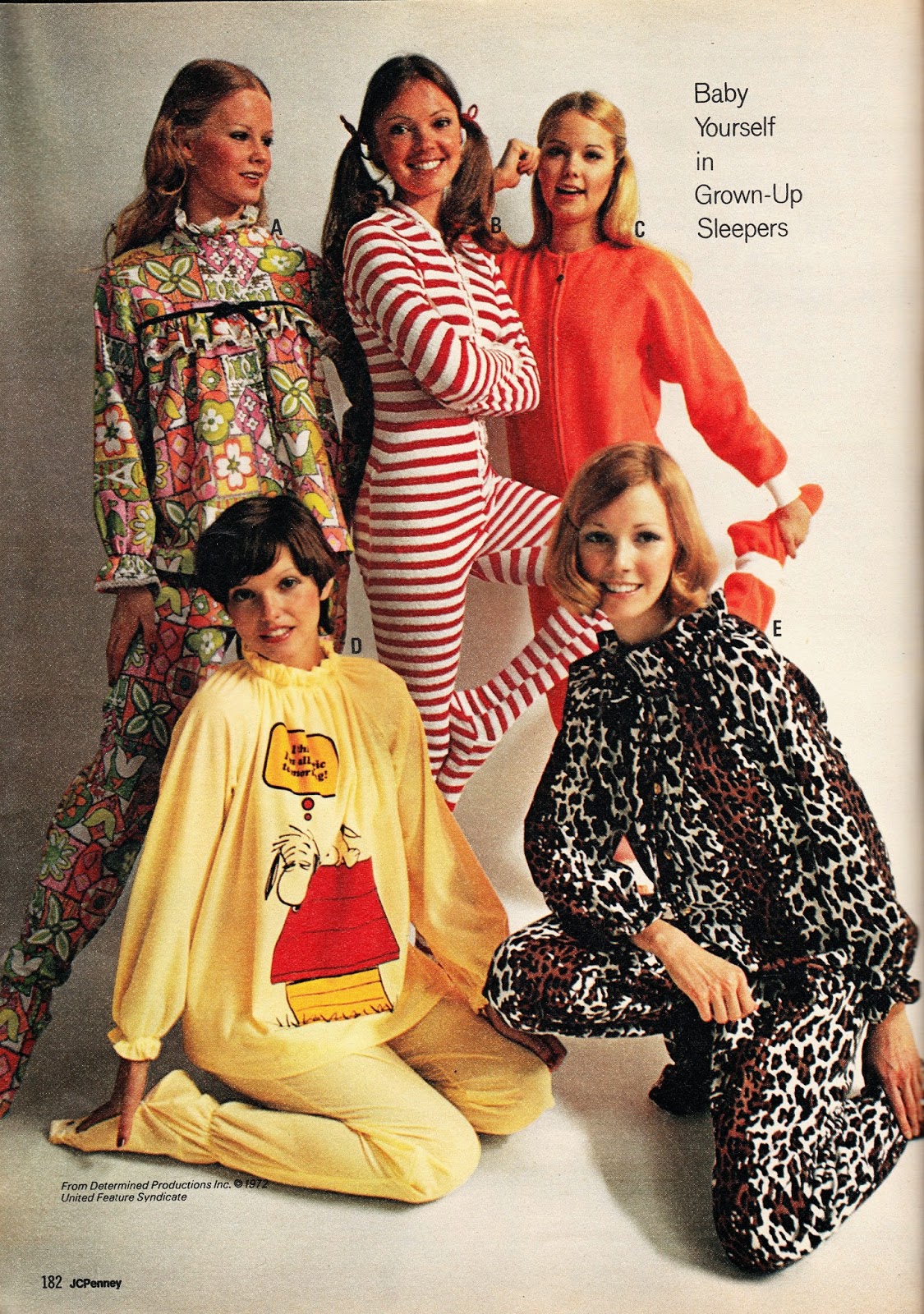 Mick was a regular in the sleepwear sections of the Big Books.  Here she is turning up the cuteness in a Snoopy sleeper alongside three of the original K Club members: Karen, Kay, and Kathy.  You've gotta love some of these poses - Kay with the one-legged stork pose and Kathy, well, is she stretching out those quads getting ready for a run? 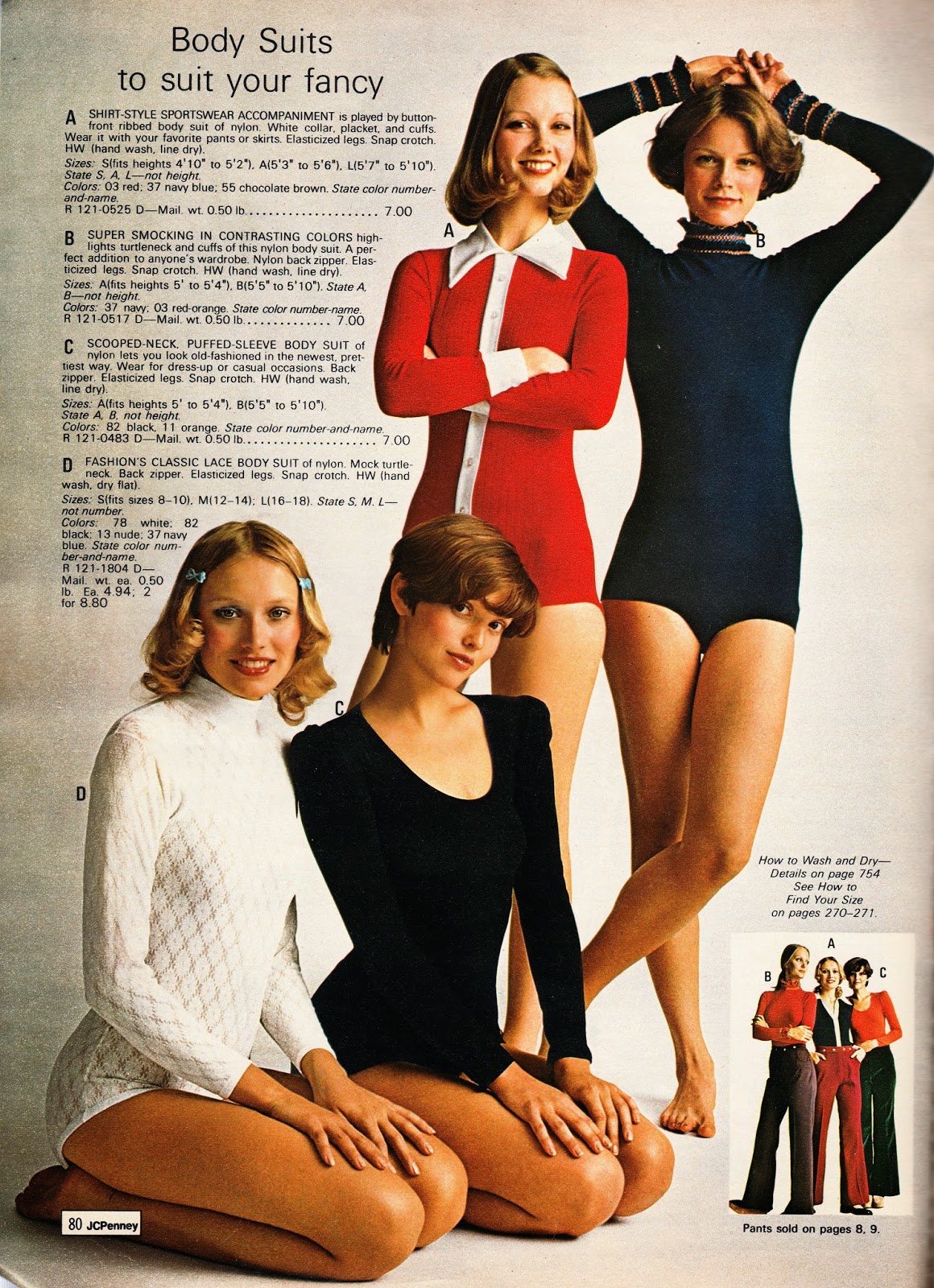 And Mick was a regular in the ever popular bodysuit sections too!  Here she is with Pia and Shelley showing off those 70s bodysuits with style!  Once again the dilemma - do I save this for the next bodysuit post or use it here?  Oh the burden of such decisions! 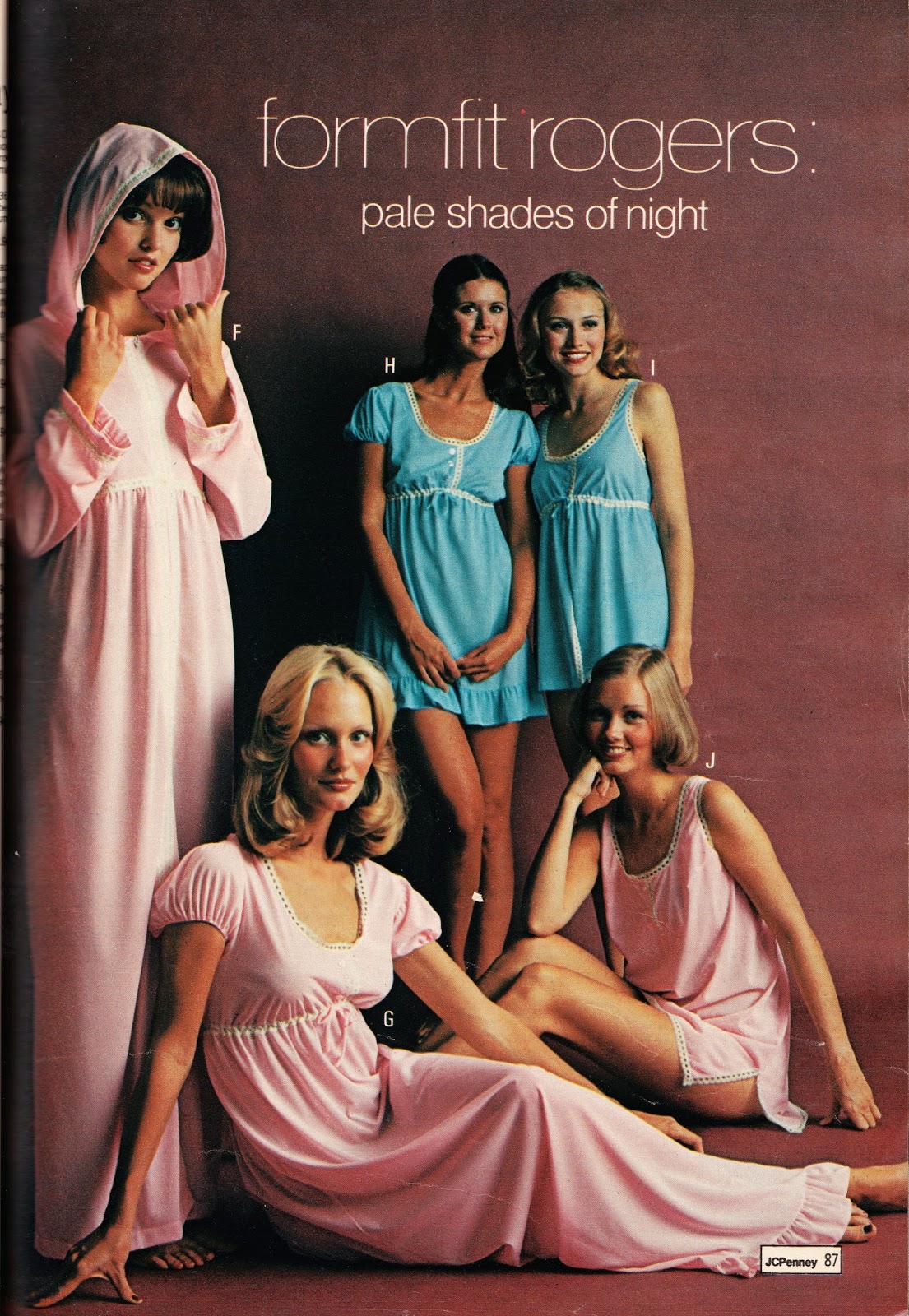 Yep, here again is Mick in some killer sleepwear. I thought about saving this one for a future sleepwear post, but I had to include this pic - Mick is just too cute with that hoodie!! 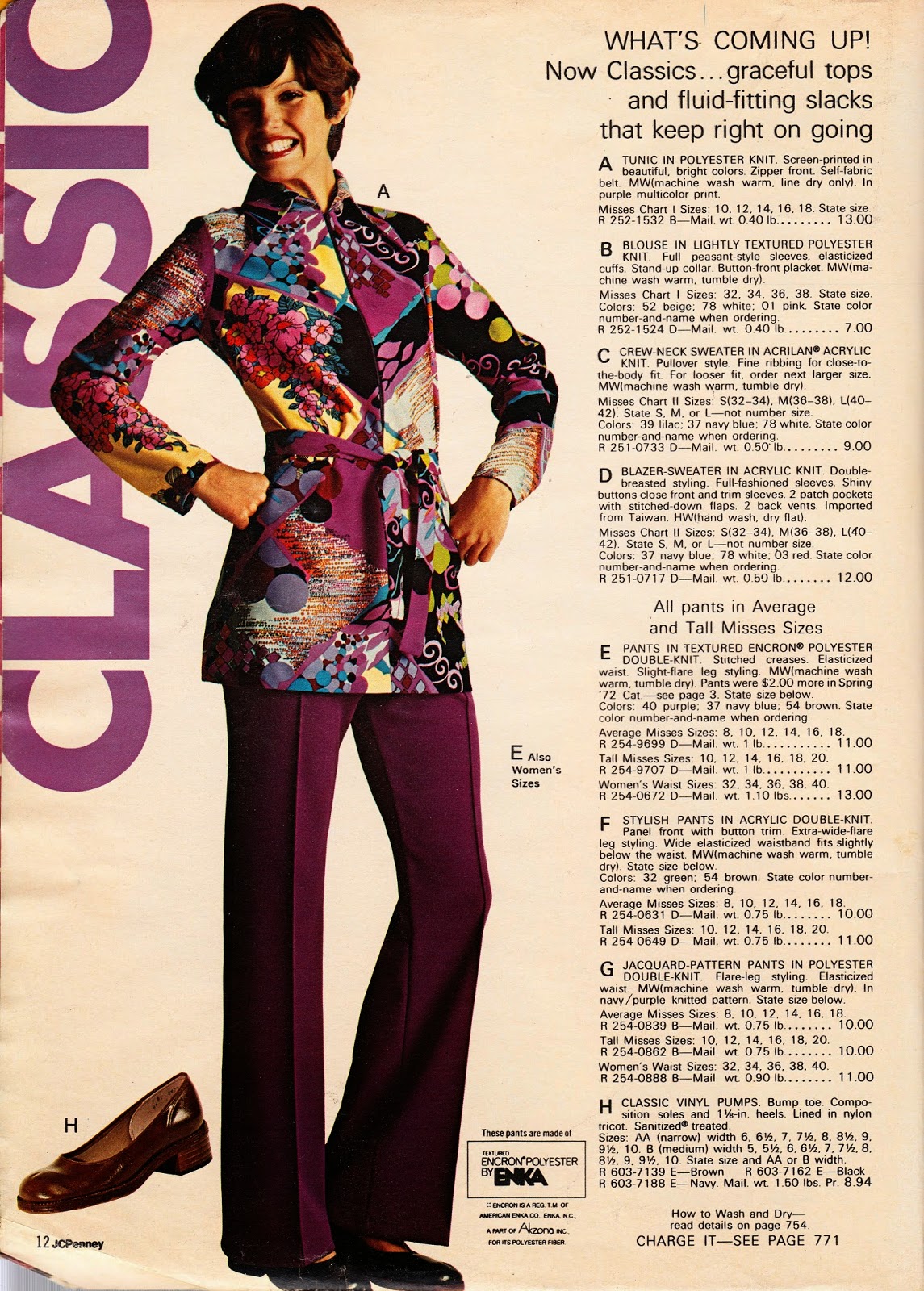 "Classic" described Mick to a tee! 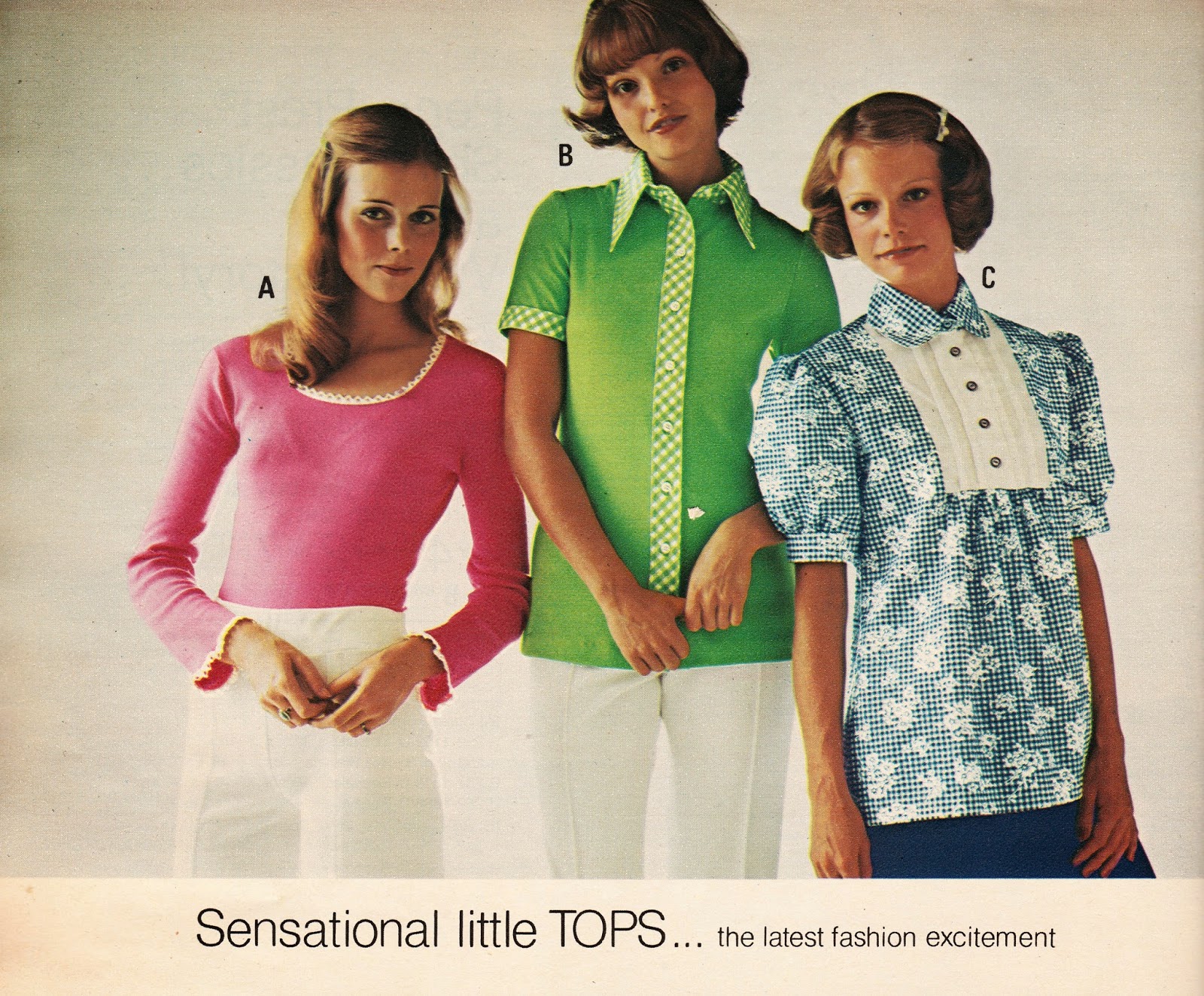 I almost didn't post this pic because I knew I could't resist making some snarky, inappropriate comment about "Sensational Little Tops".  Okay, there I did it.  Time to move on.  Still Mick and Shelley do, indeed, look sensational here! 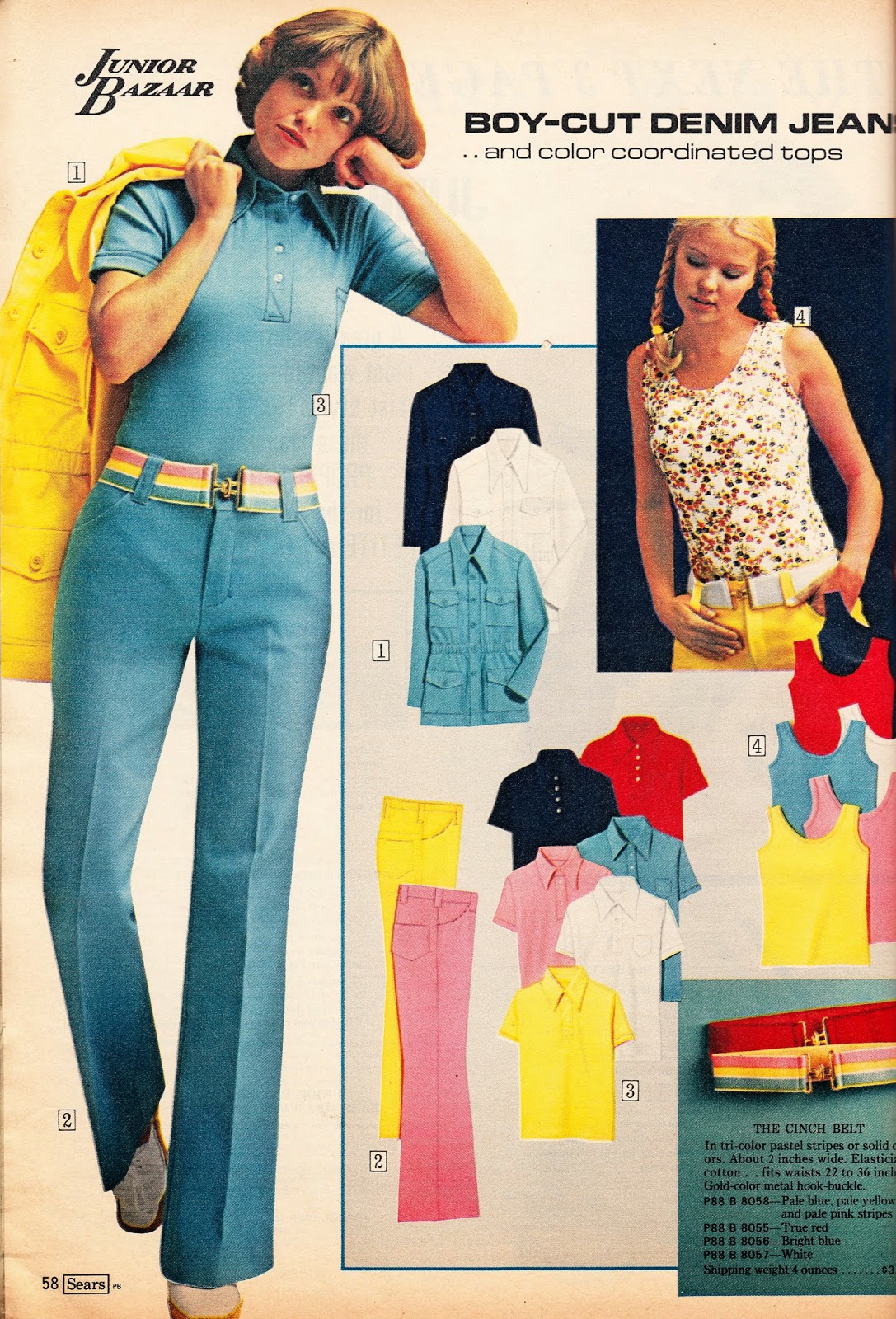 Some rather pensive, thoughtful expressions from Mick and Kathy.   I'm not sure why, but no matter, they still both look great! 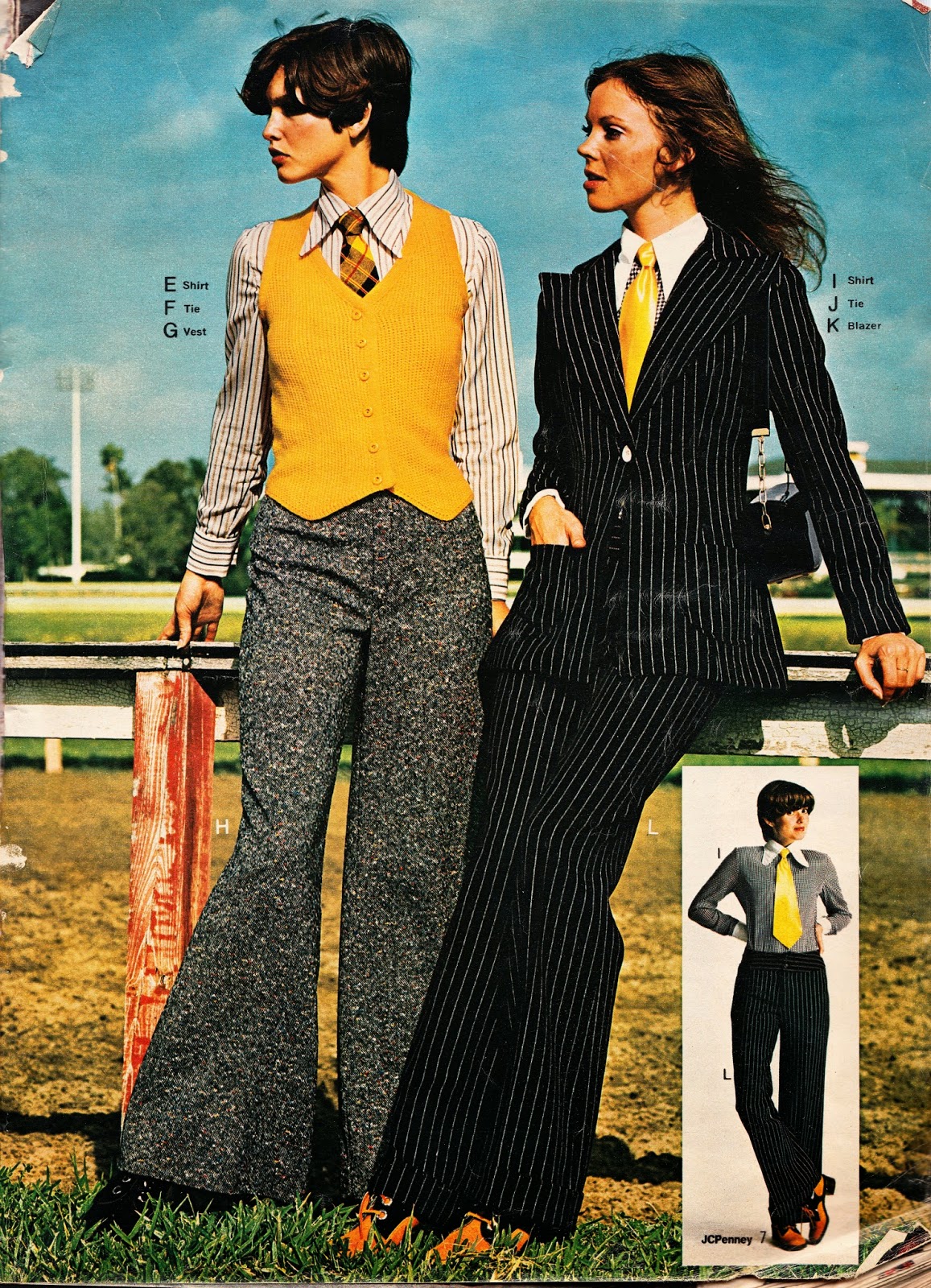 Okay, this pic has me a bit baffled.  Mick and Kay are leaning up against some sort of rail, which looks like a horse racetrack, and they are wearing pantsuits with men's ties.  Hmmm, I'm not sure what the hidden meaning is, but I love those flared out bell bottoms on Mick! 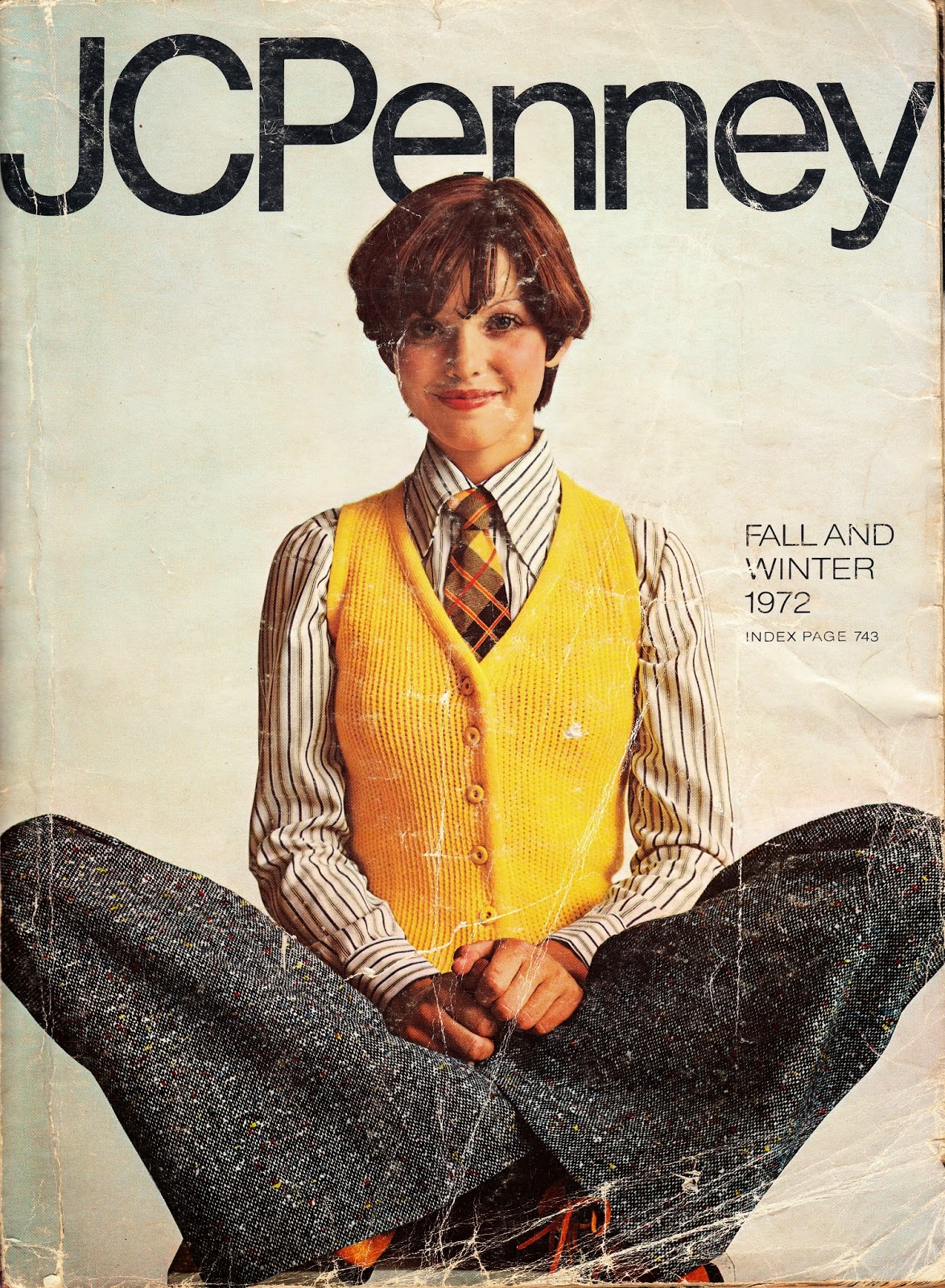 Mick Lindberg on the cover of the 1972 JCPenny Fall and Winter Big Book catalog.  Like I mentioned, Mick's catalog career was rather short, but, wow it was great!

(1)  For those of you that are new to this blog, the term "K Club" is something I made up to describe four of the regular models of the Big Book catalogs of the 70s: Kathy Loghry, Karen Bruun, Kay Campbell, and Colleen Corby.  All of their names begin with a hard "K" sound, hence the term. Naturally the K Club Special posts have branched out to other models as well.

(2) This pic is re-blogged from MiniMadMod60s. Thanks!

Yep, winter STILL has its icy grip on most of the country.  So when the mercury plunges, there's really only one thing to do - put on some super groovy 70s sleepwear designed to keep you warm! 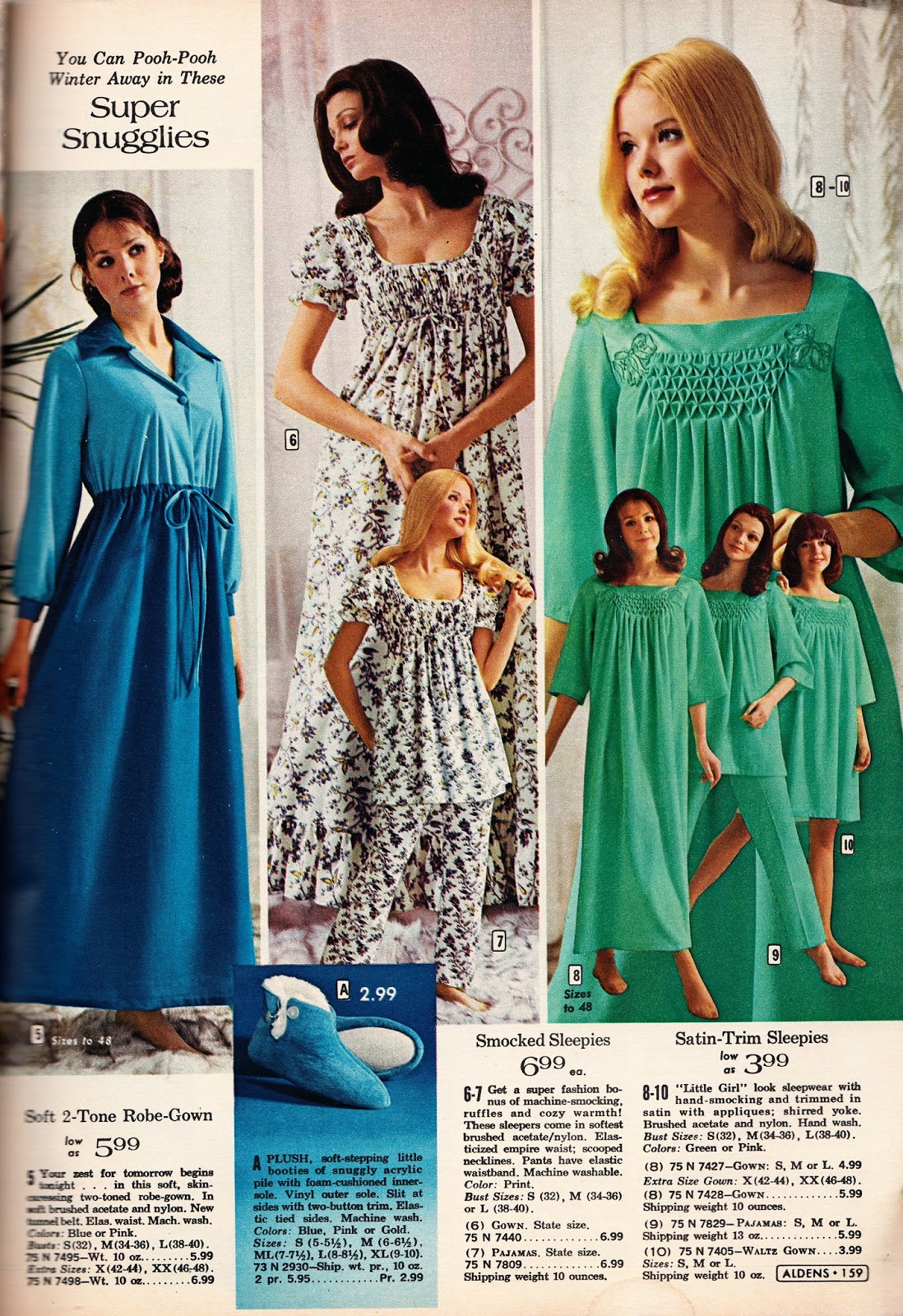 And we're not just talking about snuggling here.  No sir!! Here we've got some "Super Snugglies" from Aldens - perfect to take care of that winter chill! 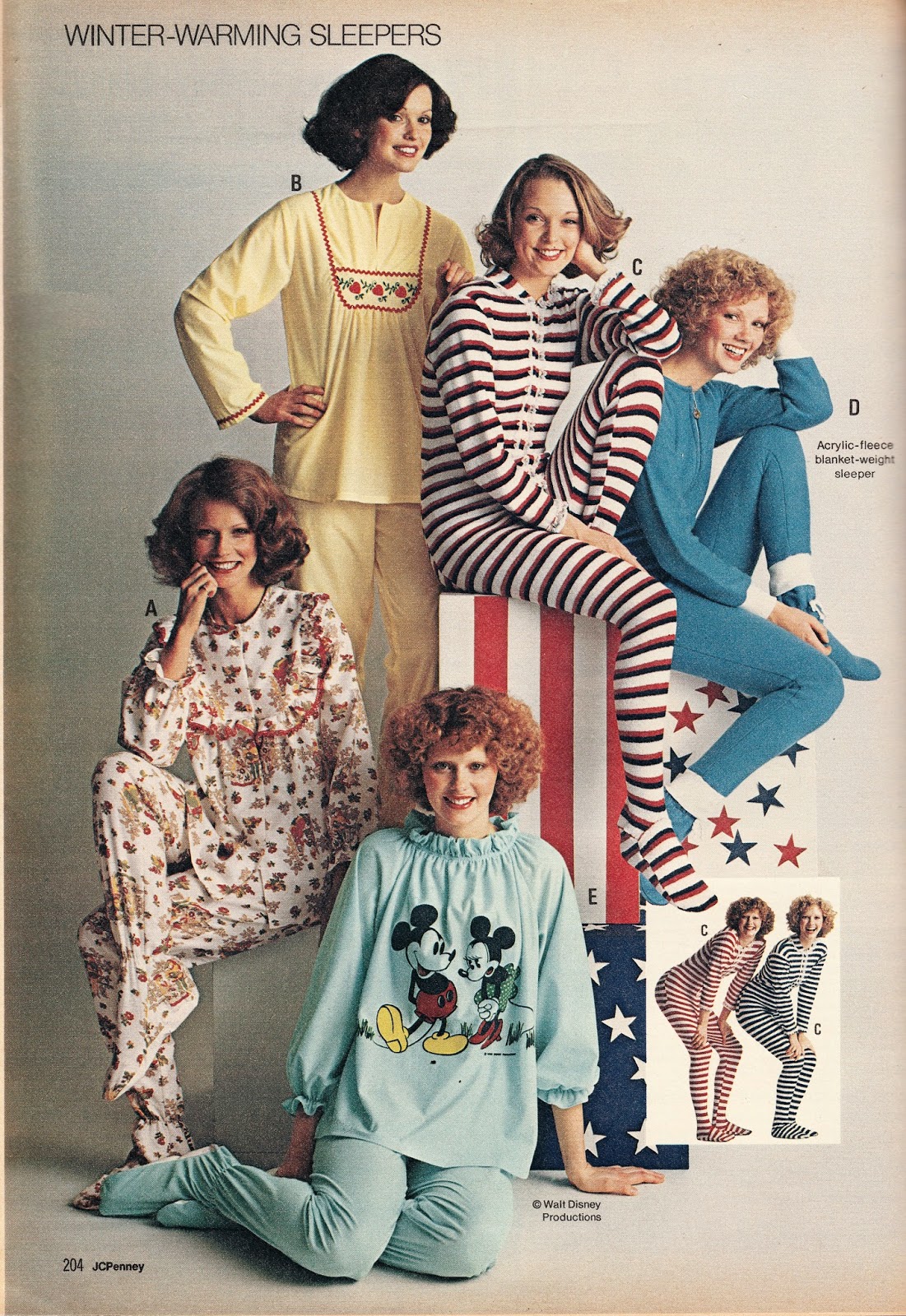 Speaking of snuggling sleepwear, nothing says winter sleepwear quite like these ensembles! They even came with footies to keep those toes snuggly warm on those cold winter nights! 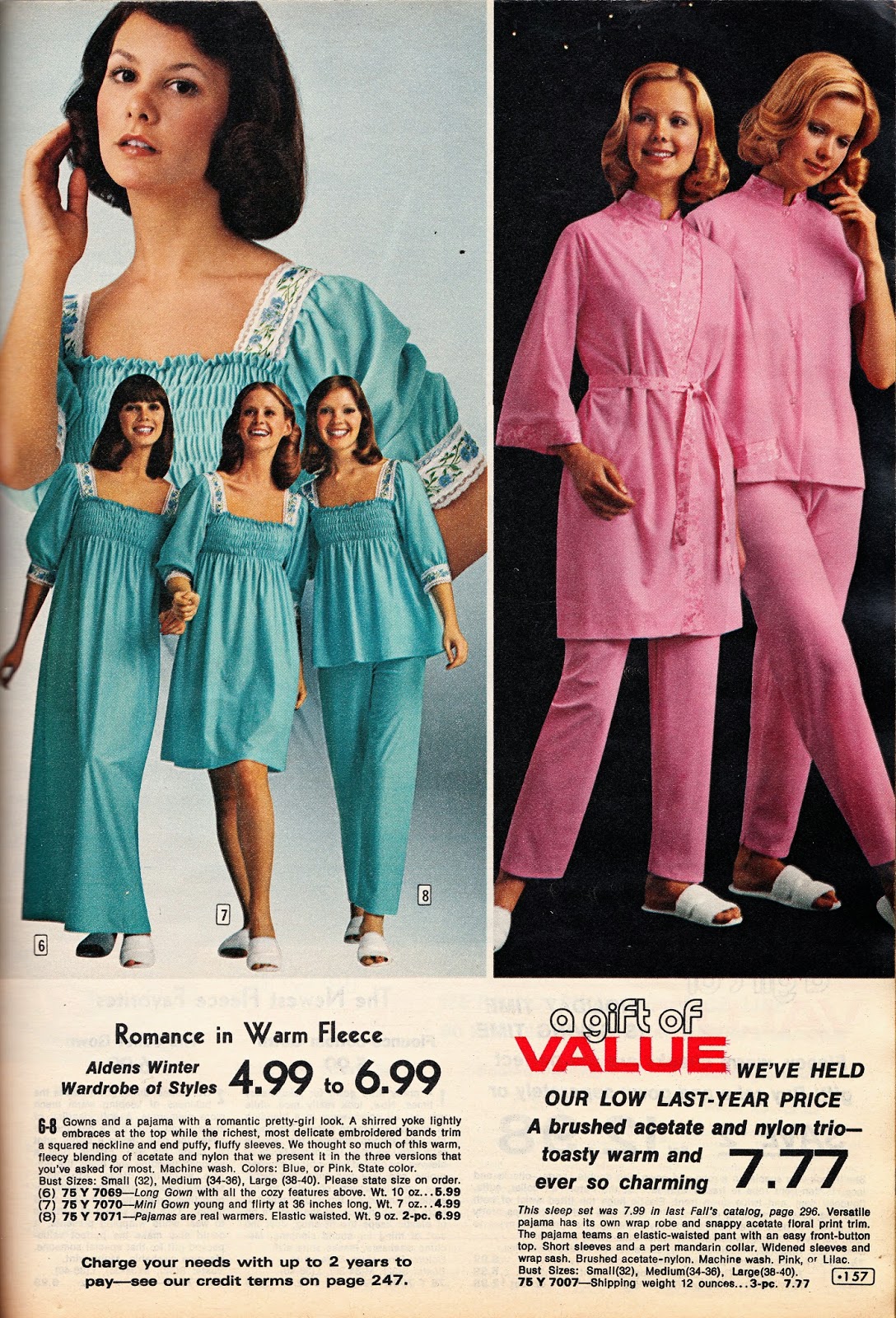 Of course fleece is always a "go-to" fabric when speaking of winter sleepwear.  Kathy appears double or maybe she has a twin?  Nah, just that good ol' 70s photography magic at work! 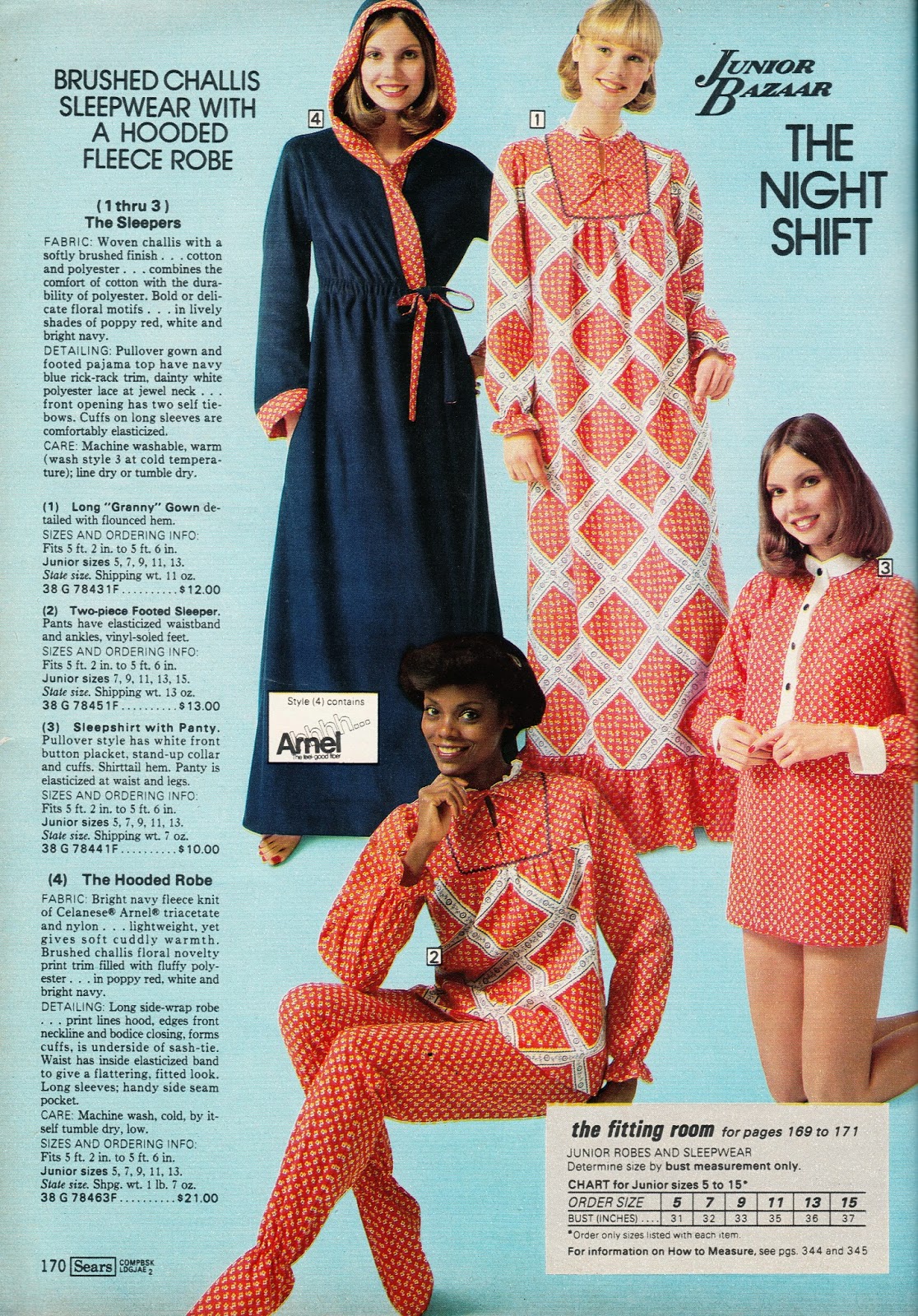 More fleece!  This time in a variety of winter sleepwear options! 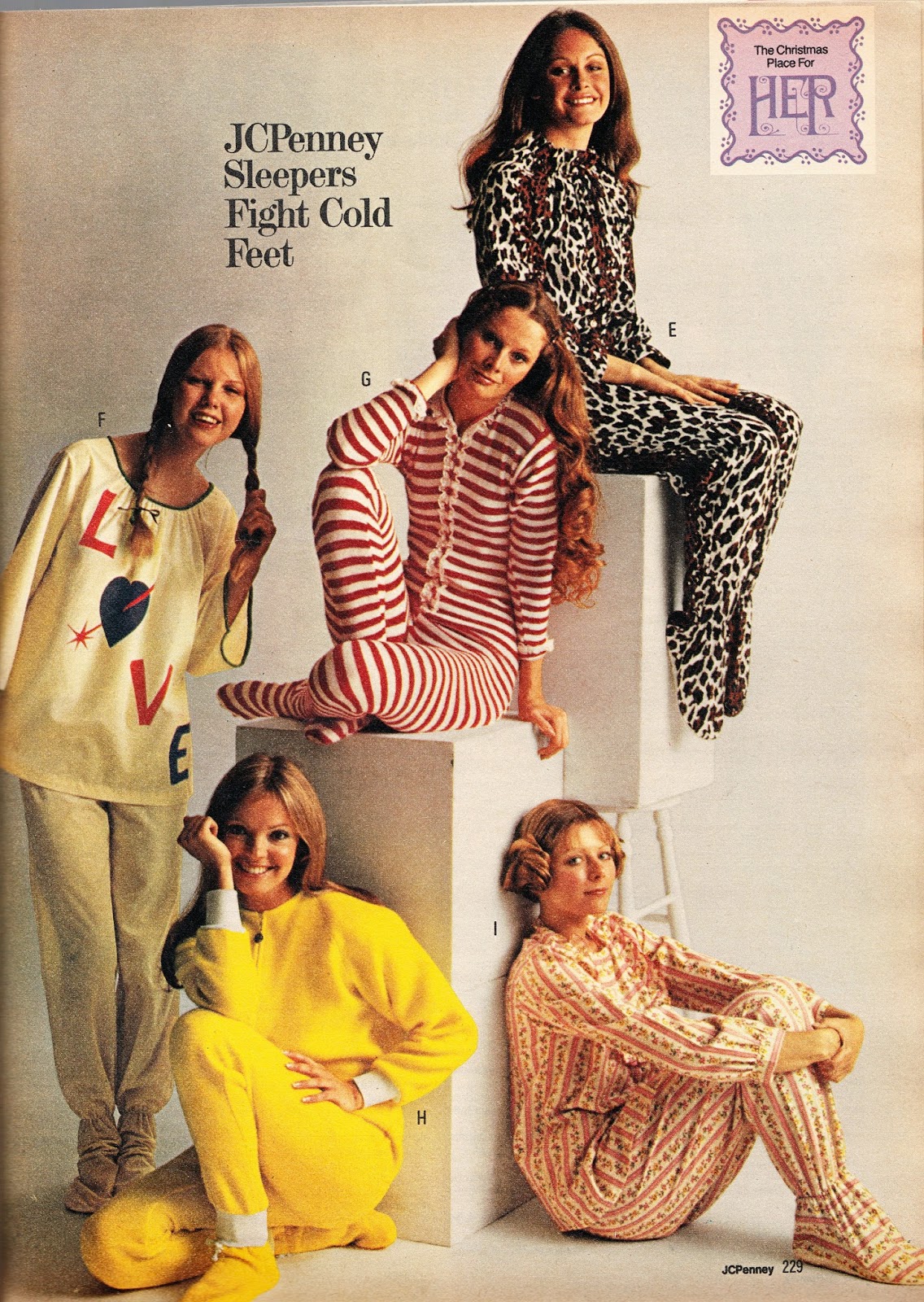 Yet more sleepers to keep you toasty warm!  You gotta love the variety of styles - all the way from bright canary yellow to leopard print designs!  These may keep you warm, but those bright colors may make it hard to actually sleep! 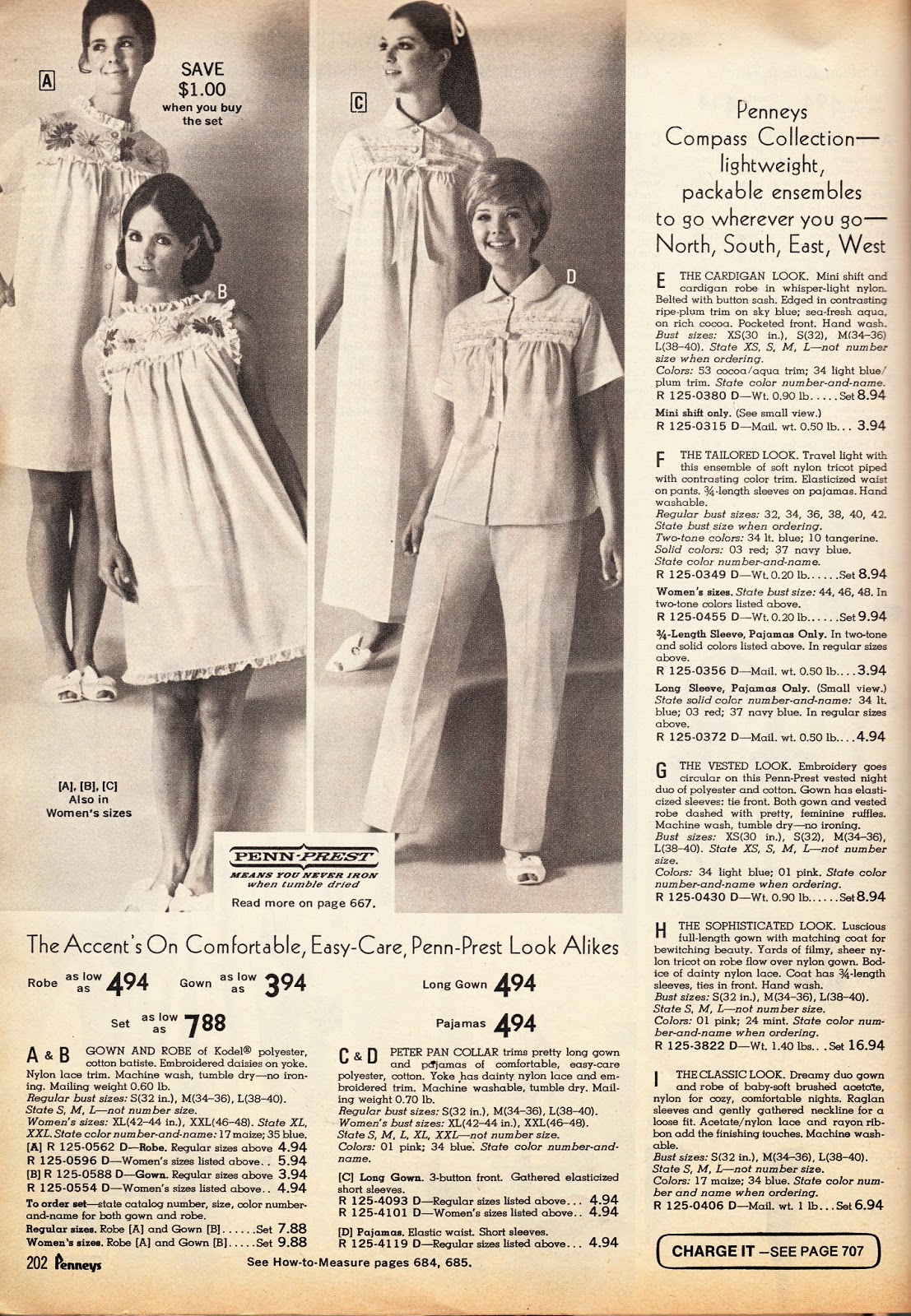 So you may want something a little bit on the lighter side.  Okay, okay, I know this pic is in black and white, but hey, Kathy still looks super cute - even in a wig!

Of course there's one way to stay warm on those cold winter nights.... 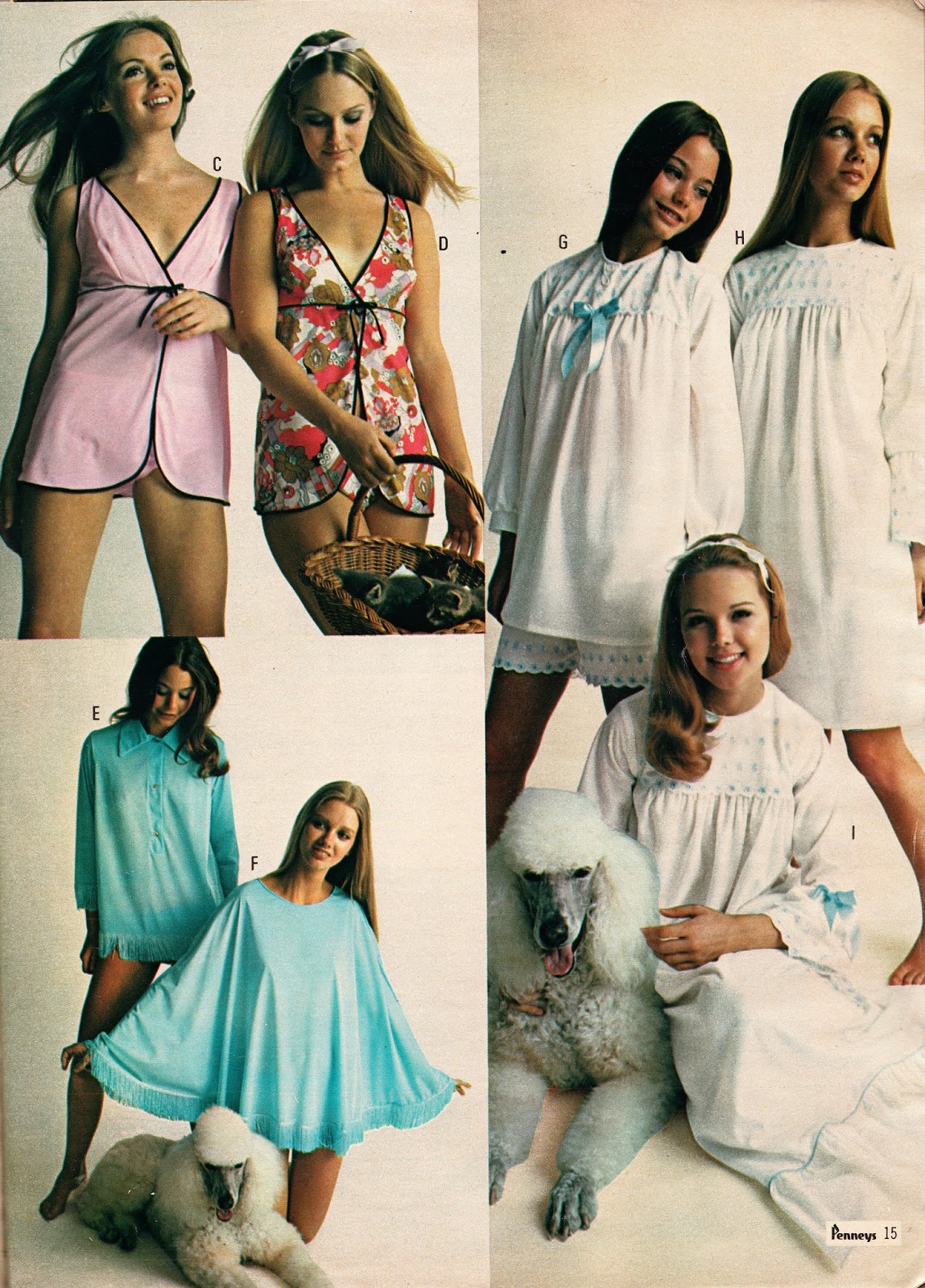 And that's to snuggle up with a friend!  Lucky dog!!

Email ThisBlogThis!Share to TwitterShare to FacebookShare to Pinterest
Labels: sleepwear

Brrr, now that the holidays are over, all that's left is winter for the next few weeks.  And I bet most of you are bundled up in the heaviest of winter coats.  Naturally, it got cold back in the 70s.  However, they had a little different take on how to beat the winter chill.

WARNING:  Yeah, this is going to be another post featuring fur.  So if that offends you, well you've been warned.  It is my duty as a historical blogger to cover all the fashions of the 70s - even those that are now considered politically incorrect. 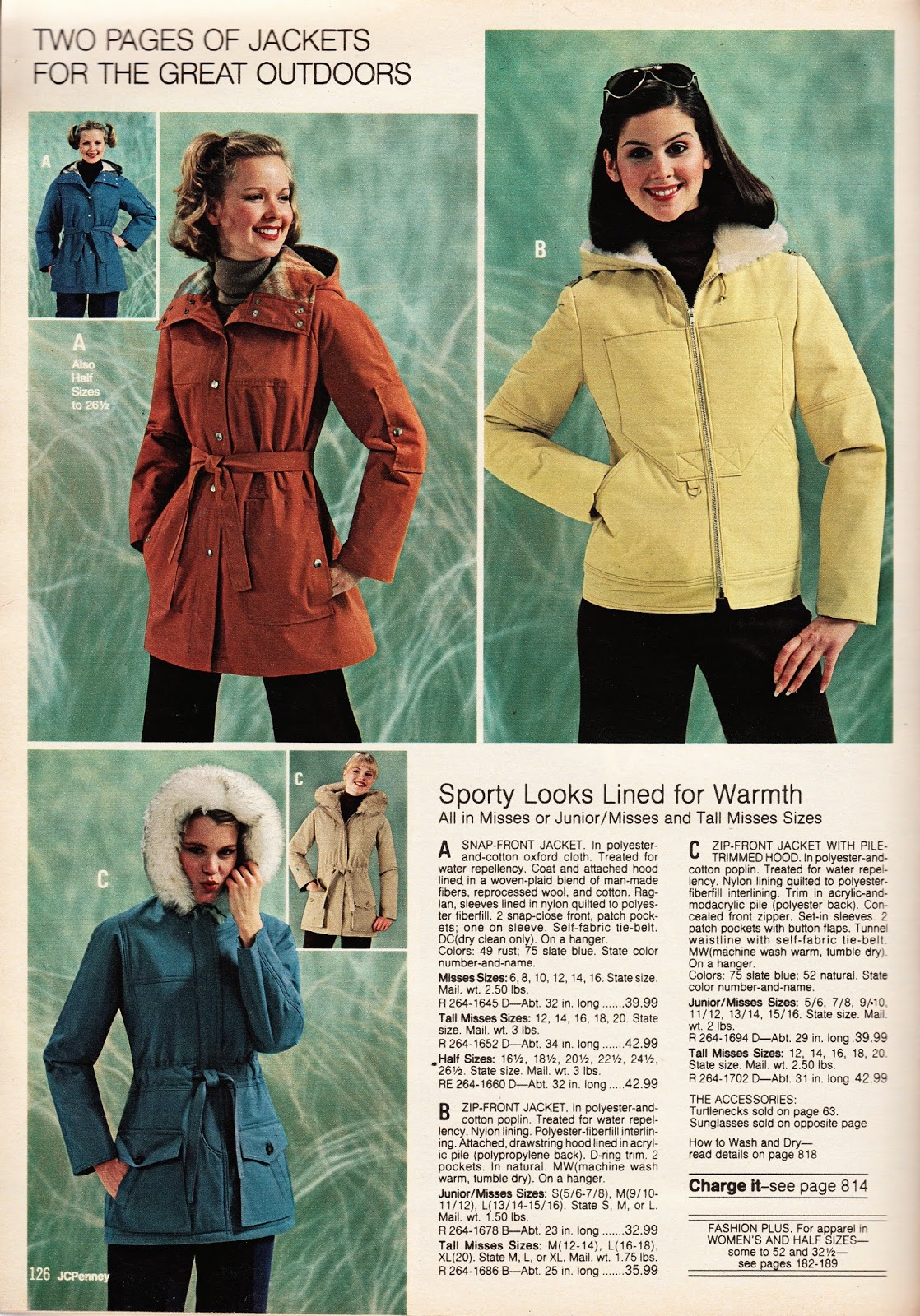 Well these jackets don't seem so bad.  Polyester and cotton are hardly controversial.  So what was I talking about??? 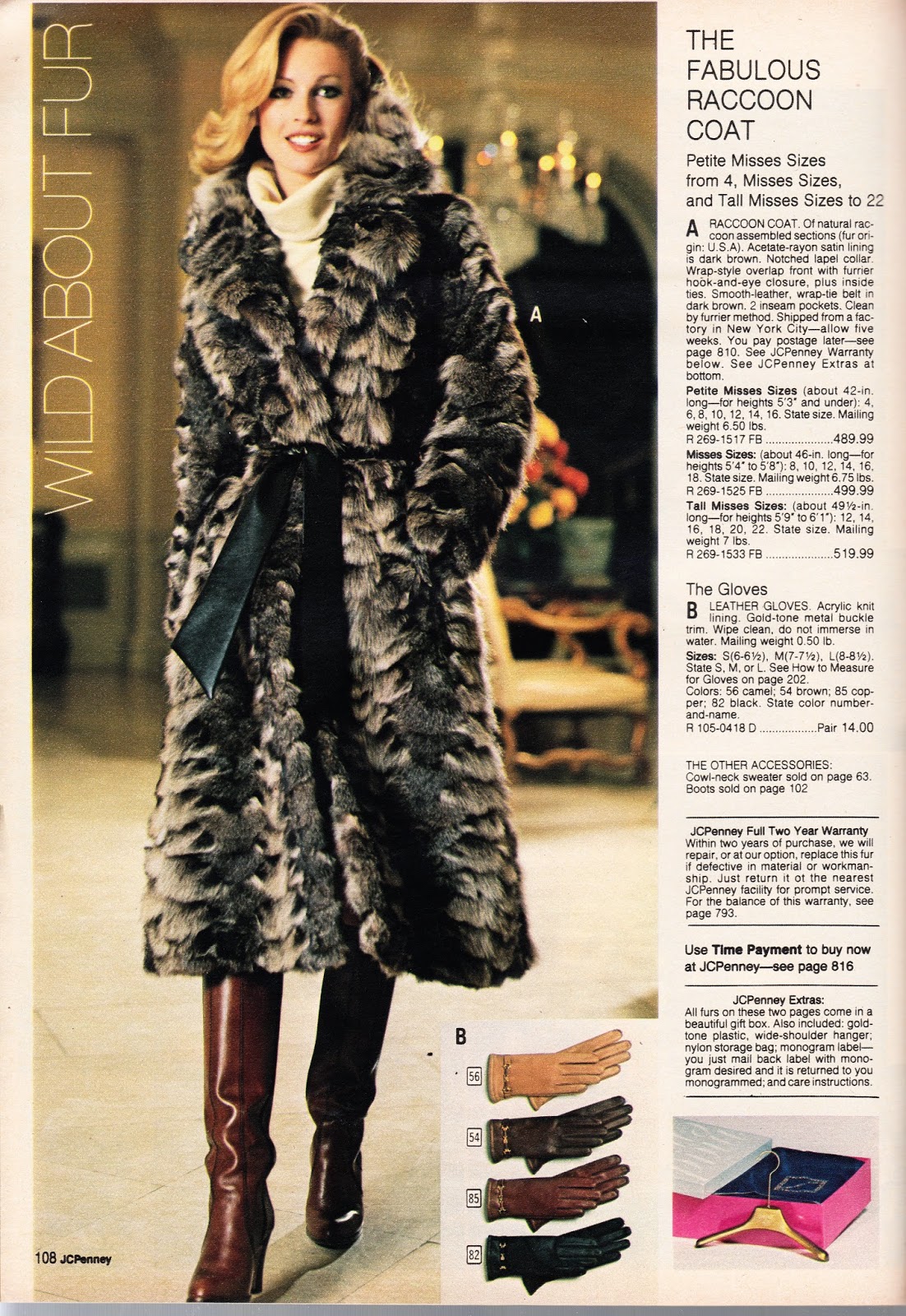 Uh oh, here we go. This is sure to stir up some passions.  It's hard to believe now, but it wasn't that long ago when a mainstream retailer could boast about being "Wild About Fur", not to mentioned showing off a full length raccoon coat! 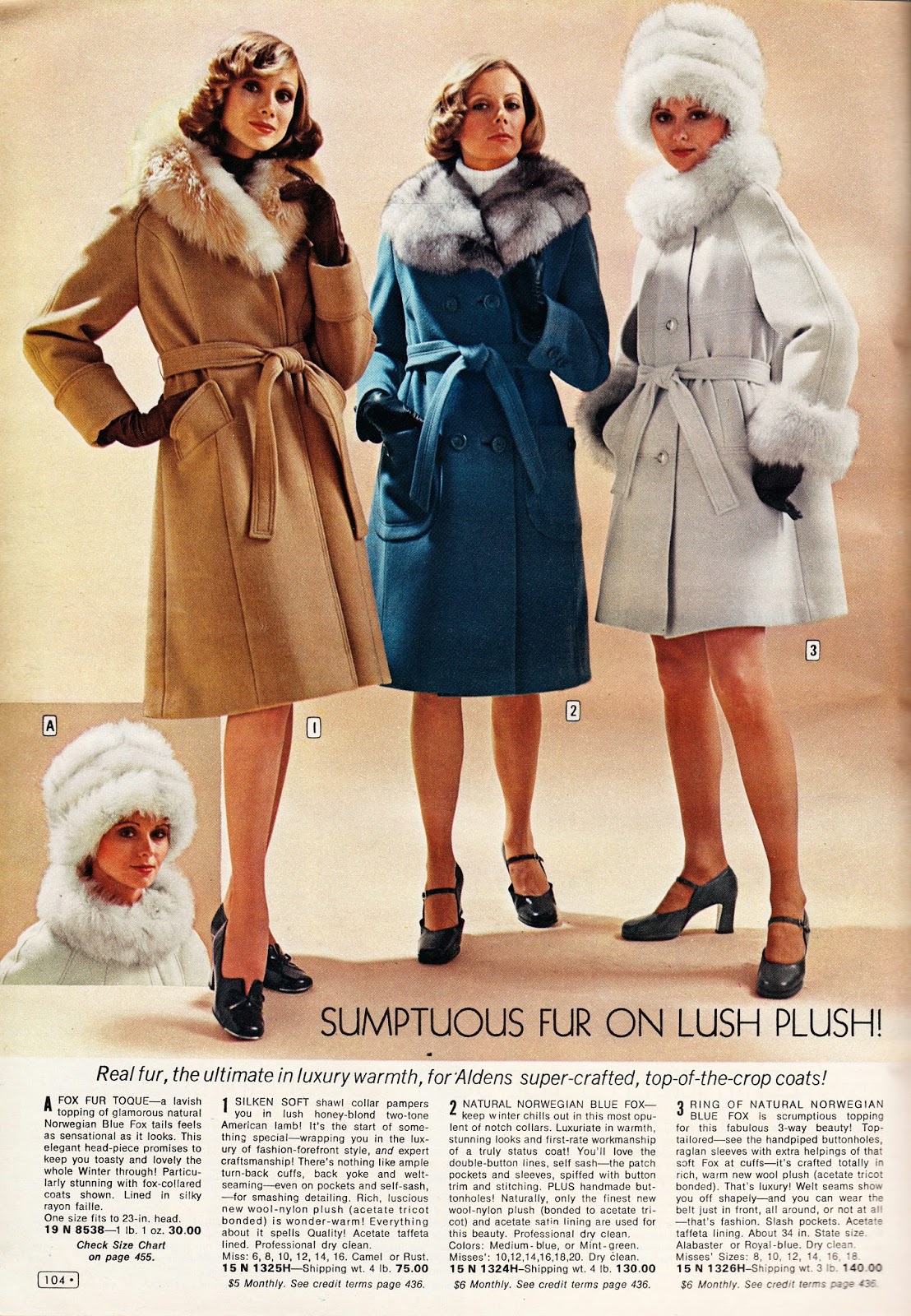 Even Aldens got in on the act.  Why settle for raccoon when you have blue fox?? 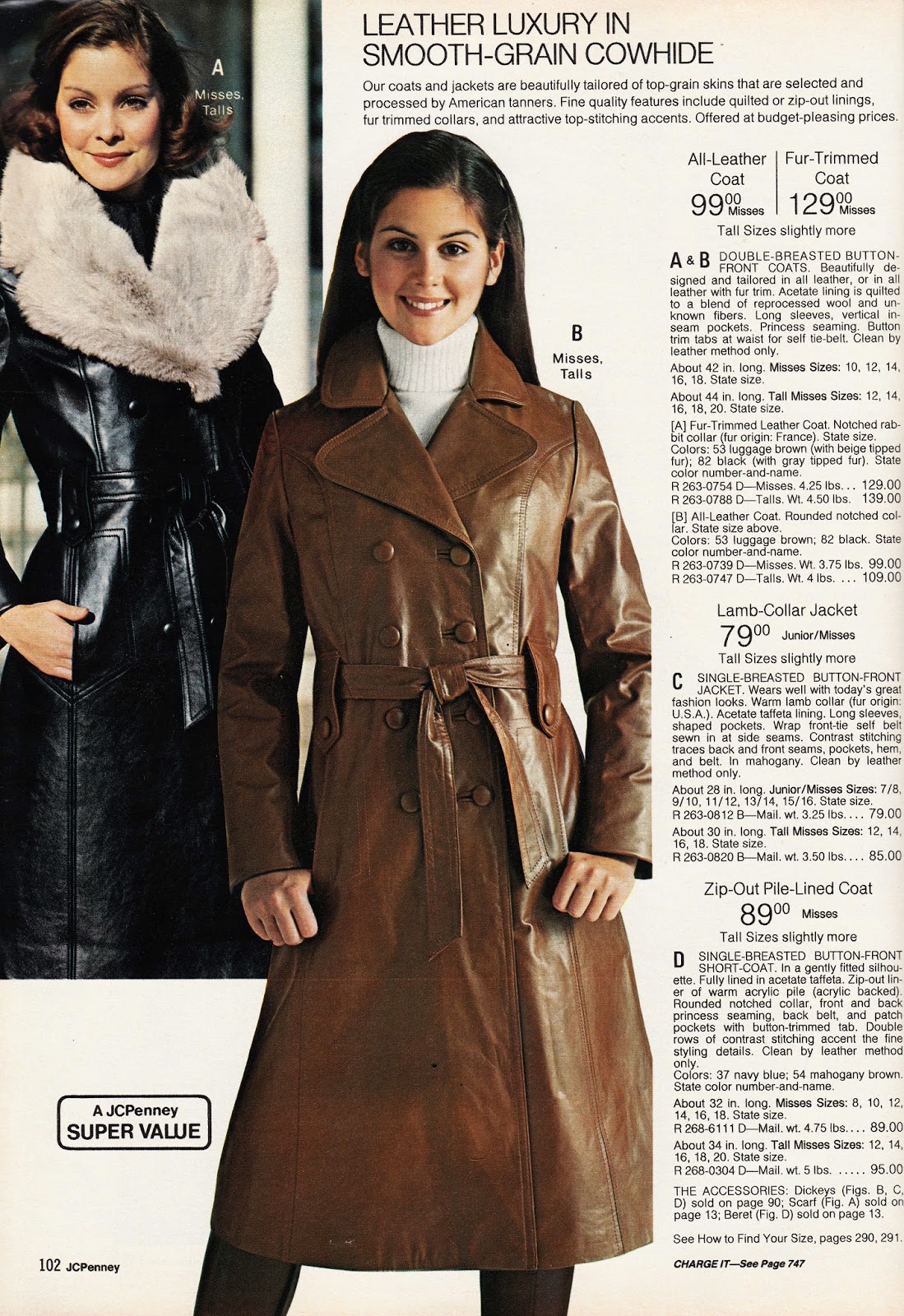 Yeah, forget the "pleather".  Back in 70s, we had real honest to goodness cowhide leather! 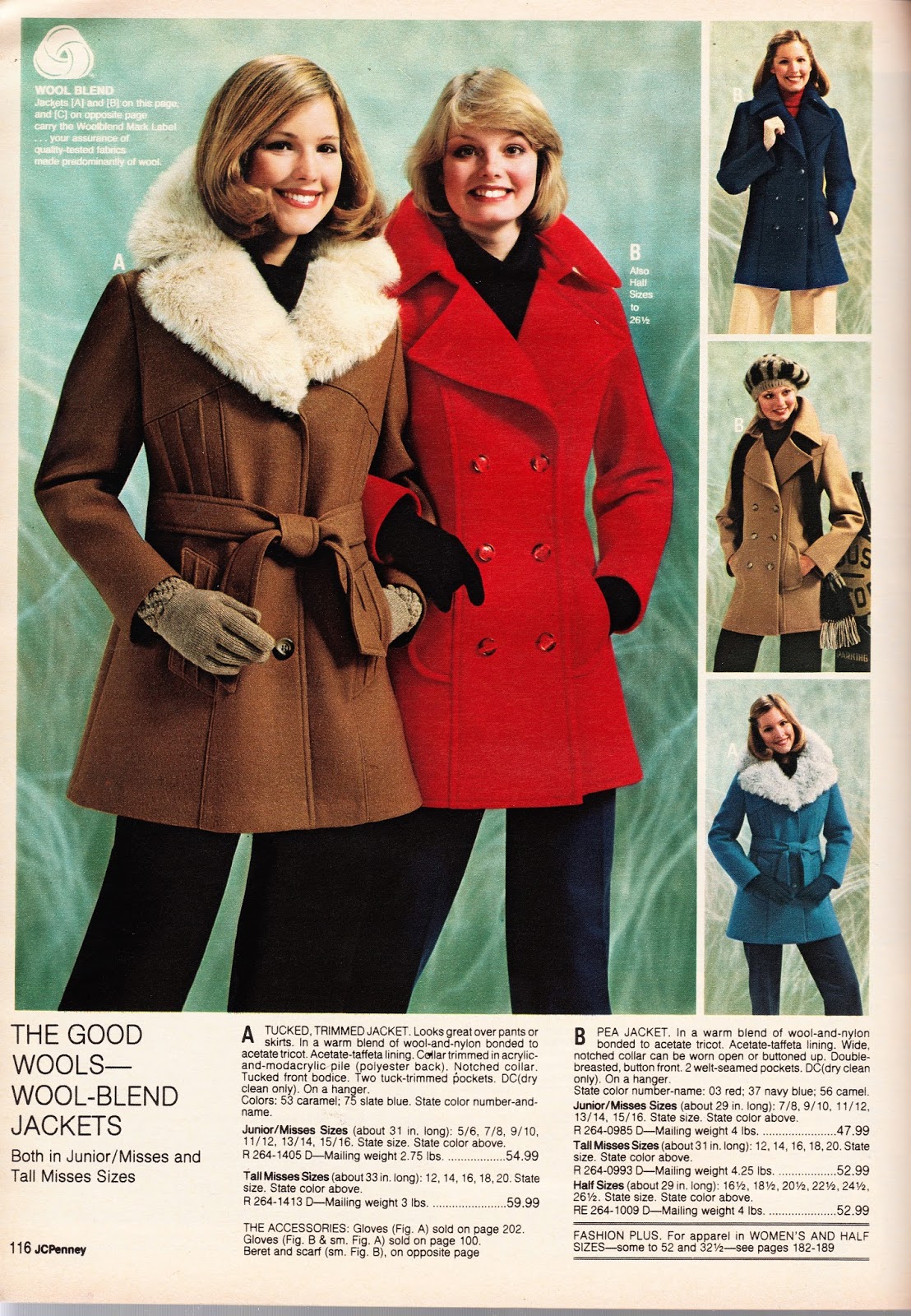 Okay, wool isn't as bad (maybe, I don't know).  I do know that wool is really, really warm and stands up to wet weather.  It's still today a great choice.

After all of these politically incorrect examples of winter coats from teh 70s, maybe we need to tone it down a bit... 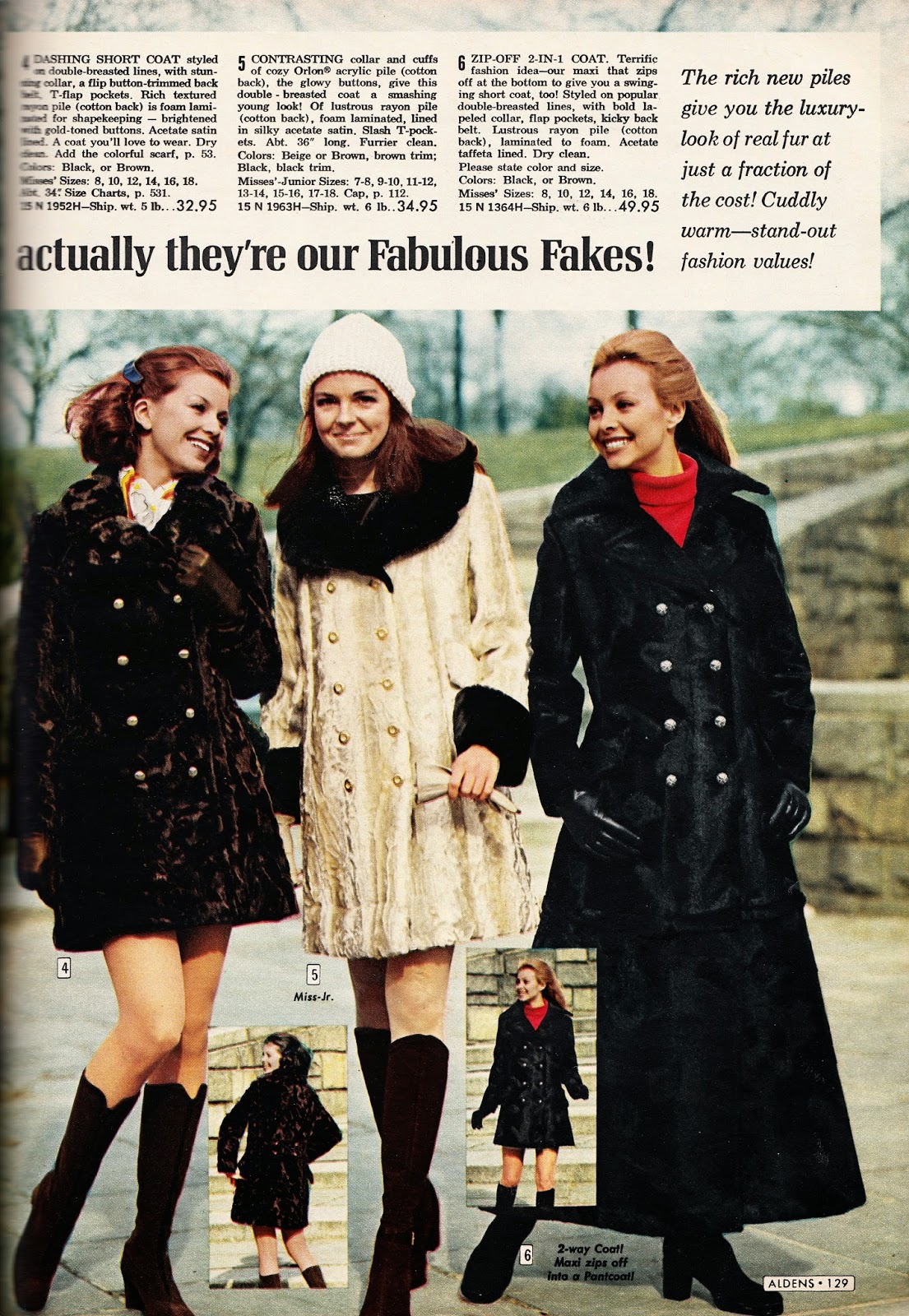 Even though fur was still in fashion in the 70s, they had their share of imitations back then also.  Of course, the main selling point was the cost. 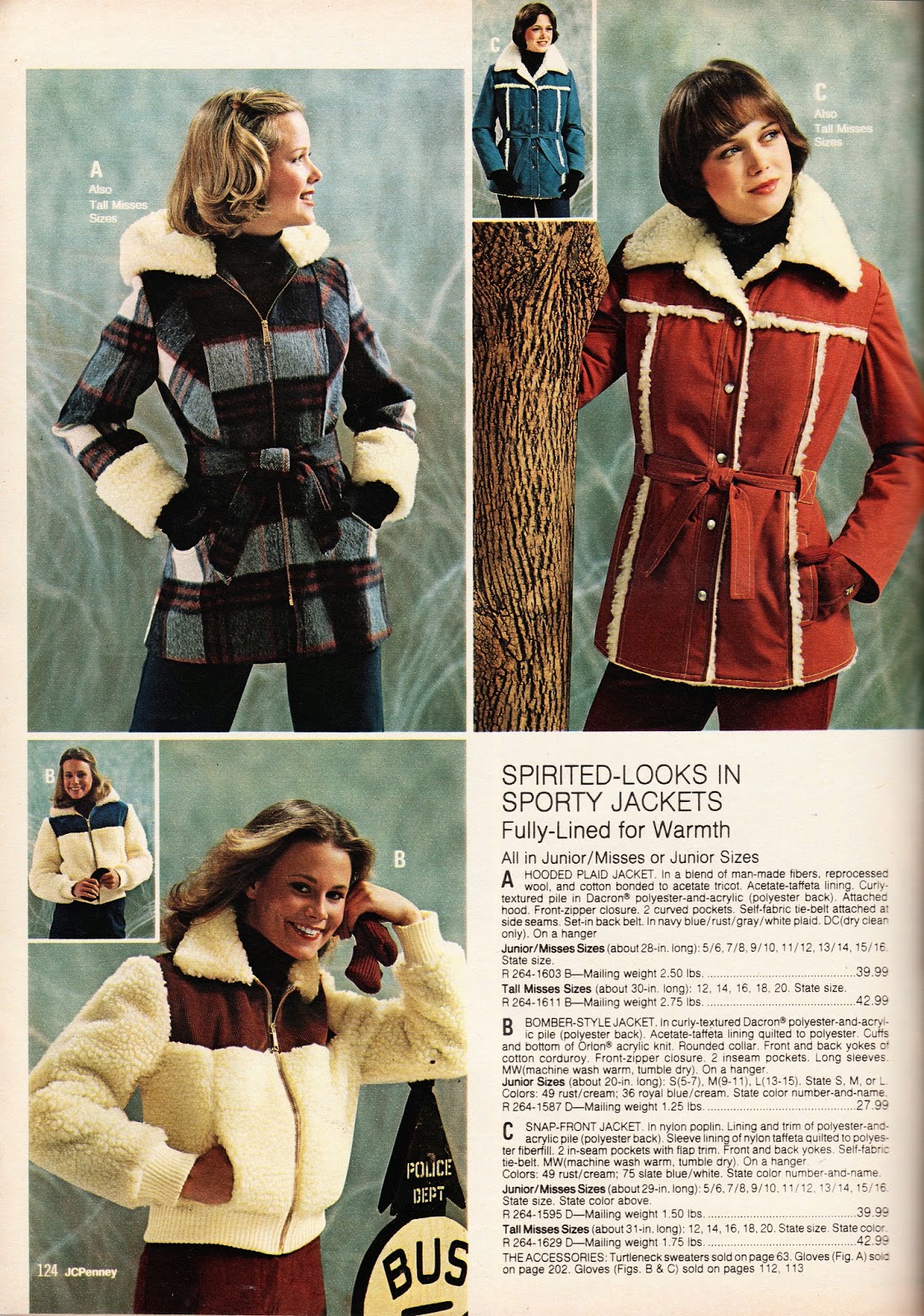 Well, we have to end with a pic of Kathy.  And along with Jayne, she shows us some more sporty 70s winter wear.  Nothing but man-made fibers here - no imitations needed!!